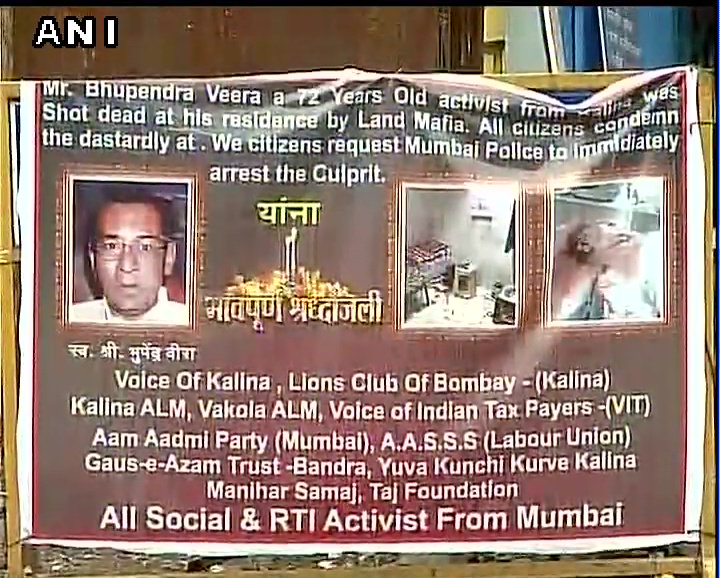 A 72-year-old RTI activist was shot dead at point-blank range at his residence in suburban Santacruz by an unidentified person on Saturday. The activist, Bhupendra Vira, who had been fighting against land mafia, unauthorised structures and encroachments in and around Kalina, was attacked last night. "The assailant entered Vira's residence around 9 PM on Saturday evening, put a gun to his temple and fired. The activist died on the spot," a police officer attached with Vakola police station said. "A case of murder has been registered against an unidentified person and a police team has been formed to nab the accused. We are also questioning a few people in connection with the case," the officer said.


Another senior police officer said the motive behind the murder was not yet clear. "We are also inquiring whether Vira had approached the police with any complaint- that he faced threat to his life."

Vira is survived by a daughter and two sons.

His body was sent to J J Hospital for post-mortem. Meanwhile, Social activist and former AAP leader Anjali Damania, who had worked with Vira, alleged that he was targeted for taking on the land mafia and demanded immediate arrest of the accused. She said Vira was attached to 'Voice of Kalina', an advanced locality management (ALM) body and a citizen's group.

Describing him as committed social worker, Damania said, "Vira along with other members of the ALM were fighting against encroachments, illegal structures and land mafia in and around Kalina by filing RTIs. He had written several letters to authorities including, Lokayukta, Brihanmumbai Municipal Corporation (BMC) and police, seeking action against illegal structures."

According to her, several activists had received threats and many of them, including Vira, had filed several complaints at Vakola Police Station in this regard.
"Yesterday morning, Vira had persuaded the BMC authorities to issue four notices to a local goon living in the same area," Damania said on Sunday.
Condemning the brutal murder of the "whistle-blower", Aam Aadmi Party (AAP) leader Satish Jain said, "Vira very bravely took on the land mafia in Kalina which was eyeing several properties in that area, including Bhupendra's shop.
"The same mafia, led by an ex-Congress corporator, had stabbed Vira's son four years ago, when he decided to take them head on," he alleged. "Vira's untiring efforts had resulted in the BMC ordering demolition of four illegal structures, apparently belonging to the mafia," he said.