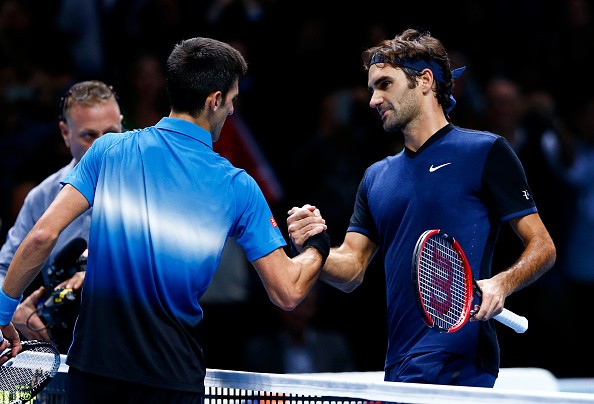 Pulling off the unexpected, former World No. 1 Roger Federer beat current No. 1 Novak Djokovic in straight sets at the pairâ€™s round robin match at the ATP World Tour Finals in London. The pair are both in the Stan Smith group at the WTF, with Andy Murray and Rafael Nadal in the Ilie Nastase group. The Swiss Maestro took victory 7-5, 6-2, upsetting the Serb, who has had a stellar year so far, taking 3 of 4 Grand Slams â€“ missing out only on the Coupe de Mousqetaires or the French Open, which he lost to another Swiss ace, Stan Wawrinka. The pair had faced off 42 times prior to this match, and had a 21-21 head-to-head record, with Federer now taking a one match lead. Despite the first set being a tight one, the Swiss outplayed the World No. 1, hitting 5 aces to his competitorâ€™s 2, and winning 75% of his first serves. He remained unbroken by the Se, b saving the only break point of that set. With a closely contested first set, it could still have been anyoneâ€™s match; Djokovic, however, appeared to lose both momentum and precision, with Federer holding serve and then breaking him to take a 2-0 lead in what would eventually be the deciding set. Although he managed to take two games in that set, Federer still held a 2-game lead over Djokovic, hitting his 6th ace of the match. The Serb committed some uncharacteristic errors, netting a routine backhand and a number of his other shots, especially surprising from a player of his calibre. In taking victory, Federer ended Djokovicâ€™s 38 indoor match-winning streak. Djokovic has also held the title in London since 2012; the 2011 title was taken by Federer, who that year beat Franceâ€™s Jo-Wilfried Tsonga to take the 6th ATP Finals title of his career. Djokovic also had a 23-match unbeaten record prior to meeting Federer at the Cincinnati Masters earlier this year, where Federer had taken victory, although the Serb had come out on top at the pairâ€™s last meeting â€“ the finals of the US Open. Mixing up tactics and shots at last nightâ€™s match, Federer outplayed Djokovic, who later said he felt he had â€œhanded him the win.â€ The victory has ensured Federer has a berth past the group stages â€“ he previously beat Croatiaâ€™s Tomas Berdych in the round robin stages, while Djokovic triumphed over Kei Nishikori. Japanâ€™s Nishikori bested Berdych in three sets 7-5, 3-6, 6-3, which now leaves Djokovic to play Berdych and Nishikori to face off against the Swiss.