AB de Villiers: You live for those pressure moments 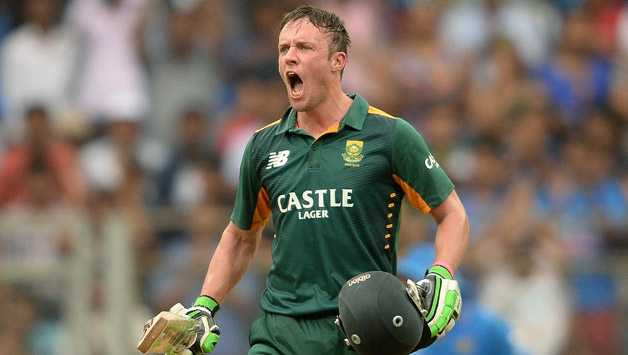 AB de Villiers walked to the wicket on Sunday with South Africa in trouble in the fifth and final one-day international against England. AB de Villiers walked to the wicket on Sunday with South Africa in trouble in the fifth and final one-day international against England at Newlands. Two-and-a-half hours later he walked off, unbeaten on 101, with South Africa having clinched a 3-2 series win with five wickets and six overs to spare. â€œYou live for those pressure moments. Itâ€™s taken me years to feel comfortable in pressure situations like that and Iâ€™m starting to feel like I have really good composure in those kind of situations. Iâ€™m really proud of the composure I had in the moment where I felt the game was on the line,â€ said the South African captain. It could hardly have been tougher. South Africa were 22 for three, chasing 237 to win, and De Villiers himself had been unusually short of runs, without a century in seven Test and four one-day innings against the tourists. It helped De Villiers that Reece Topleyâ€™s devastating opening spell for England had not dislodged Hashim Amla, his fellow world-class performer. â€œThe chat was not to worry too much about the runs and to make sure we got in and not to lose another wicket. Weâ€™ve done it before and I felt it was really important for us to take it ten runs at a time. I told â€˜Hashâ€™ things would calm down if we get to a 50-run partnership. We were prepared to put in the hard yards. The partnership was eventually worth 125 runs. Amla made a relatively restrained 59 off 93 balls and was content to let De Villiers do the bulk of the scoring before he charged a wide ball from Moeen Ali and was stumped. De Villiers went on to make his 22nd one-day international century and batted for 97 balls, hitting 11 fours and a six. The win completed a remarkable turnaround for South Africa after they had been well beaten in the first two matches. For the third successive match, an English batsman made a century but finished on the losing side. Opening batsman Alex Hales hit 112 but lacked significant support from his teammates as England were bowled out for 236 after being sent in to bat. Halesâ€™s second one-day international century capped a fine series for the tall right-hander, who had made fifties in each of the previous four matches, including an innings of 99 in the second game in Port Elizabeth. He finished the series with 383 runs at an average of 76.60 and was named man of the series. Joe Root (27) and Ben Stokes (29) were the only other England batsmen to reach 20. England coach Trevor Bayliss said fielding was the difference between the two teams, referring especially to crucial dropped catches in the fourth match in Johannesburg where South Africa kept the series alive with a one-wicket win. â€œBoth teams relied on two or three batsmen and the bowling was very similar,â€ said Bayliss. â€œTheyâ€™re a better fielding team than us at the moment.â€ The England coach said he was happy with the progress being made by a young side but acknowledged that they had occasionally been found wanting in pressure situations. â€œWeâ€™ve certainly got some work to do there for sure but that will come with experience,â€ said Bayliss. â€œAt some point that experience has got to pay dividends. Hopefully the guys will learn from the experience of playing against someone like De Villiers and the way he went about his innings today.â€ England captain Eoin Morgan admitted that England were outplayed on Sunday. â€œWe did have chances earlier in the series to win it but we werenâ€™t quite able to take the opportunities that came. Weâ€™re a young side, we created opportunities but it wasnâ€™t quite enough.â€