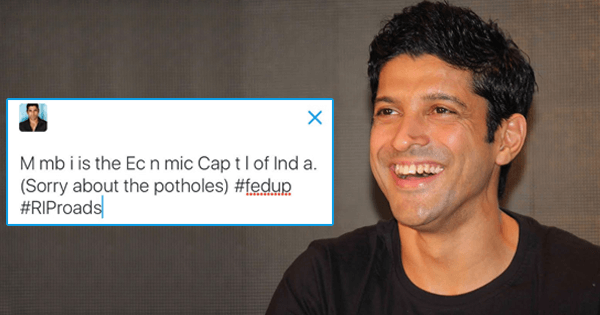 If you know anybody in Mumbai, they will tell you what havoc the rainy season brings on them. The economic capital is almost submerged, with water on the streets, the roads and sometimes even inside the houses. Roads look less like pathways and more like the surface of the moon. And nature's fury spares nobody, neither the common folk nor the Bollywood stars. So when Farhan Akhtar posted a funny tweet about the Mumbai rains it just drove home the fact that nobody is above nature's fury.

Hey @TwitterIndia, the tweet in the attached image was rejected 3 times from being posted on my TL. Any reason why? pic.twitter.com/P8qVOuVcp1

Now that, Mr Akhtar, is as funny as it could get. This man seems to have gotten the game of puns just right. We totally get what you're saying. Hope the rain situation gets sorted soon!