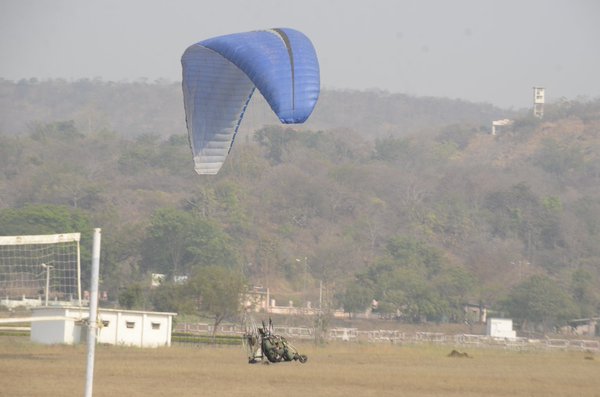 A team of 14 pilots of the Indian Air Force has created a new national record by completing a 10,000-km-long paramotor adventure expedition. "It is a no mean feat considering that the pilots flew in an open cockpit remaining unprotected from the vagaries of weather and other elements while traversing through varying terrains ranging from mountains, coasts, forests and desert," an Air Force spokesperson said. The IAF expedition 'Pradakshina' had set out on a 10,000-km-long flight on February 1 from IAF's Kalaikunda air base in West Bengal and came back to a rousing welcome this Saturday. The feat by the 'Skyriders' team of 14 Air Warriors led by Wg Cdr MPS Solanki surpassed the existing national record of 9,132 km. As the name of the expedition suggests, the team undertook circumnavigation of India along the periphery. The team followed the eastern coast to Kanyakumari before turning northwards along the western coast till Gujarat. It then transited through the desert of Rajasthan, fields of Punjab and followed the foothills of Himalayas till Jammu. The team then followed a southerly course till New Delhi and resumed on an easterly course transiting through Uttar Pradesh and Bihar before arriving at Kalaikunda.