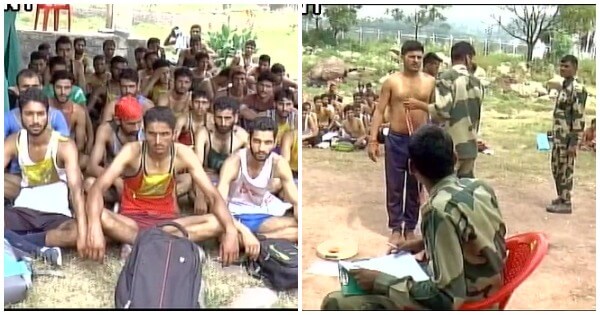 For the second straight day on Friday, a large number of Kashmiri youth participated in a drive in Anantnag for recruitment in the army, significantly on a day when separatists had given a call for march to this district which was the epicentre of the ongoing unrest in the valley. "After the overwhelming response on the first day and inspite of 'Anantnag Chalo' (march to Anantnag) call (by separatists), a large number of candidates from the districts of Budgam, Pulwama, Shopian, Anantnag and Kulgam turned up on the second day of the rally today," an army spokesman said.

J&K: Locals turn up in large numbers for a BSF,CRPF and SSB joint recruitment camp in Rajouri pic.twitter.com/FuR2L4IsRb

Defying diktats from the separatists and militants for keeping away from the security forces, more than 12000 Kashmiri youth have registered online for the recruitment rally which will conclude on September 25. Anantnag has been the worst-hit district in the current unrest in the Valley, witnessing large scale stone-pelting by the youth. The spokesman said the enthusiasm, motivation and hunger for success among the youth could be seen on the second day of the rally.

We just wanted an opportunity to serve the country, want to thank security forces for holding this camp: Mohammad Akram,local pic.twitter.com/wlY2BkgclA

"Nothing could deter these young minds from appearing in the rally," he said, adding "It makes a significant constituency" which has made an important statement in these times of unrest. "Besides reflecting the sense of duty and patriotism, love for adventure and need for employment, the large turnout of youth at this rally, also represents clearly the desire for calm, peace and normalcy of the candidates themselves, their family and friends," the spokesman said. Yesterday, around 500 local youth turned up for the recruitment rally in this south Kashmir district.

I am very happy, hope to join the BSF and make my country proud: Mohammad Khurshid,local pic.twitter.com/KkccWJGmIV

"The number of applicants could have been more had there been no problems in the internet connectivity in the Valley," he said. The Army's recruitment drive would move north from September 29, when such a rally would be held in Bandipora district. Violence broke out in the state in the aftermath of killing of Hizbul Mujahideen commander Burhan Wani in an encounter with security forces on July 8.