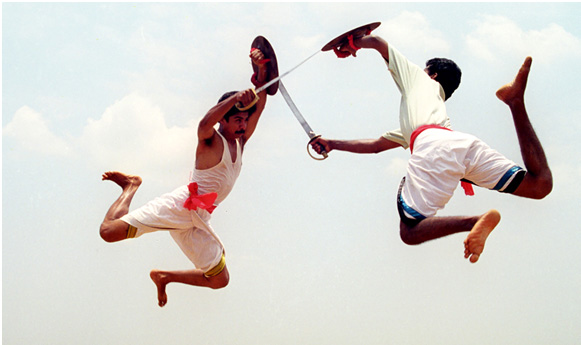 India is a peace loving country, other than fighting over trifle issues and transforming them into horrifying communal riots we could be called the ardent devotees of pacifism, just fighting our own neighbor countries over a small patch of land sponsored by a major part of GDP(the wars). Okay, we might be less peace loving as we believe ourselves to be and when it comes to fighting, Indian martial arts kicks ass of all the other martial arts in the world. In fact there are bleak evidences that all forms of Chinese martial arts originated in Southern India, so here is to the fighting spirit of India.

When we talk about combat and Indians, we start envisaging the Sikhs, powerful and raw power. Gatka originated in Punjab and features skillful use of weapons, especially swords.

The Maharashtrian way of combat, mostly prevalent around and in the town of Kohlapur. It is particularly known for its use of the uniquely Indianpata(sword) and vita (corded lance).