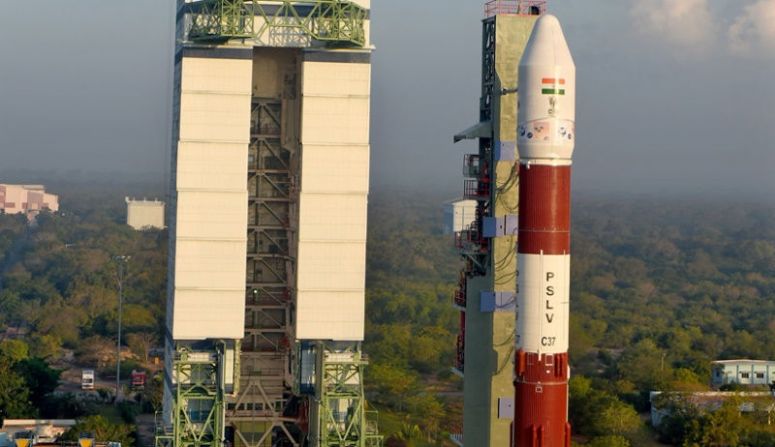 We knew Indian Space Research Organization (ISRO) was going to try and break the record of the maximum number of satellites launched on one rocket, but on Wednesday, they easily set the new record. The Indian space agency launched 104 satellites successfully on one rocket, setting a new world record.


Acing a launch is now a habit; Congratulations @isro on a record launch. We are proud of you?? pic.twitter.com/rTJqH1YY7r

The Indian space agency's record earlier stood at launching 20 satellites at one go.

The highest number of satellites launched in a single mission is 37, a record that Russia set in 2014. The US space agency, NASA has launched 29 satellites in a mission.


What has been launched in the mission?

ISRO scientists used the XL Variant of the PSLV -- the most powerful rocket -- earlier used in the ambitious Chandrayaan and during the Mars Orbiter Mission (MOM).


The Polar Satellite Launch Vehicle, in its 39th flight (PSLV-C37), launched the 714 kg Cartosat-2 series satellite for earth observation along with 103 co-passenger satellites, together weighing about 664 kg at lift off.


The primary satellite, one from the Cartosat-2 Series, will be similar to the earlier four satellites in Cartosat-2 series. After it becomes operational, it will provide images that will be useful for coastal land use and regulation, road network monitoring, distribution of water and creation of land use maps, among others. The Cartosat-2 Series satellite has a mission life of five years.

.@isro creates history, sends 104 satellites into orbit in one launch. Here is all you need to know: pic.twitter.com/6vMgzluccc


Indians reacted with joy on Twitter to the successful launch:

This remarkable feat by @isro is yet another proud moment for our space scientific community and the nation. India salutes our scientists.

Overwhelmed to witness this magnificent feat by @isro in launching 104 satellites. A proud moment for all Indians. Salute to the team! #ISRO


#ISRO launches a World record of 104 Satellites into orbit thru #PSLVC37 - A Proud Moment for Indian Scientists and the Nation! ???? pic.twitter.com/AEA00xWehu

What an amazing feat achieved by #ISRO by launching PSLV rocket successfully carrying 104 satellites. India is proud of such organizations!