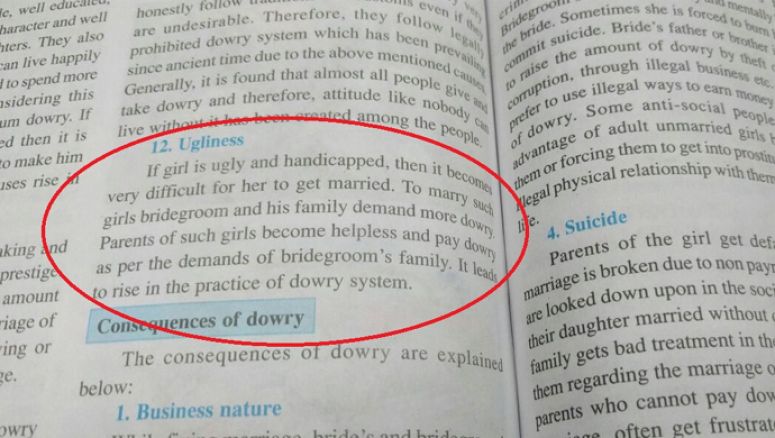 A textbook for Class XII in Maharashtra has cited an outrageous reason for the dowry problem prevalent in India - "ugliness" and physical handicap of a girl.

The remark appears in a chapter in the sociology textbook titled 'Major Social Problems in India' of the state Secondary and Higher Secondary education Board.

Along with other factors like religion, caste system, social prestige and compensation principle, the chapter cites "ugliness" as a reason for the grooms' families to demand more dowry.

"If a girl is ugly and handicapped, then it becomes very difficult for her to get married. To marry such girls, bridegroom and his family demand more dowry. Parents of such girls become helpless and pay dowry as per the demands of the bridegroom as family. It leads to rise in the practice of dowry system," the textbook says.

When asked about the passage which could be objected to by gender rights groups, an official of the Maharashtra State Board of Secondary and Higher Secondary Education today said the matter will be looked into. Board chairman Gangadhar Mamane said, "I will discuss the issue with the board of studies and will then comment on it.''