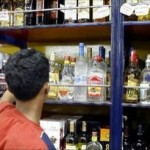 Further to some of the really inane sexist nonsense we've seen in the past few months alone, comes a popular Delhi restaurant's attempts at 'good humour.' Imperfecto, a restaurant and bar in Delhi's Hauz Khas Village, which was better known for its busy decor and mediocre food, will now go down in memory as the place that, with their lame attempt at 'jaaast a zoke,' nose-dived their way into the pits of tasteless humour. Earlier this week, a Twitter user (featured below), posted an image of a rather unfortunate signage outside the restaurant. And the best part is - in keeping with the present reputation of the once-hip shopping district - that they think it is all really cool. Of course. No sexist, offensive surprises there. To give you a better idea as to what is it that we, bra burning ladyzillas, are getting worked up about, we will provide you some incriminating evidence on how Imperfecto lived up to its name rather well. Here, proof that social media is on this 'joke' too:

And in some lone corner of the social media universe of food groups, peeps are furiously debating whether this is just another case of #PantiesInABunch or not. While for every five people, there is one smart-ass who pops out of nowhere (when fingers are raised on sexist statements like these) becoming the devil's advocate, clarifying to everyone that "all this is in good humour, yaar. Bloody feminists ko aur koi kaam nahin hain because they fat and frustrated," do not pay attention to their justification just yet. Much like casual sexism otherwise, there is absolutely nothing funny about this. Not that misogyny ever went out of fashion, but to write something so outrightly misogynistic, and then to be completely unapologetic, if not oblivious to the implications of this shit, deserves an award. Wow Imperfecto, we are proud of you. Sacchi mein. You should consider stand up comedy, now. With such irrepressible talent, you will gain a lot of attention and praise from all the patriarchal 'hipsters' who claim to like your food. In the interest of being fair, we called Imperfecto and asked a representative for a clarification. We presumed that someone could have messed around with the chalkboard and reworded the damn message. Thankfully for us (not for them), the representative of the restaurant whom we spoke to (on conditions of anonymity) agreed that this happened. They did this. Deliberately. And said that it was not meant to 'hurt anyone,' that there was nothing 'negative' about it, and that it was 'just a joke,' 'all in good humour,' 'was an Imperfecto thing,' 'cows fly,' 'I am going to marry Shah Rukh Khan,' blah blah blah. Basically, the usual: denial, and delusional oblivion to what it even means to be funny, and to be funny at the expense of women. Women are NOT OBJECTS. Just like men, or cows, or dogs, or cats. They are not your baap ki jaagir. They are, in fact, no one's fucking property. Stop projecting and pushing these ideas. Even if it is 'jaaast a zoke,' please DON'T DO IT.