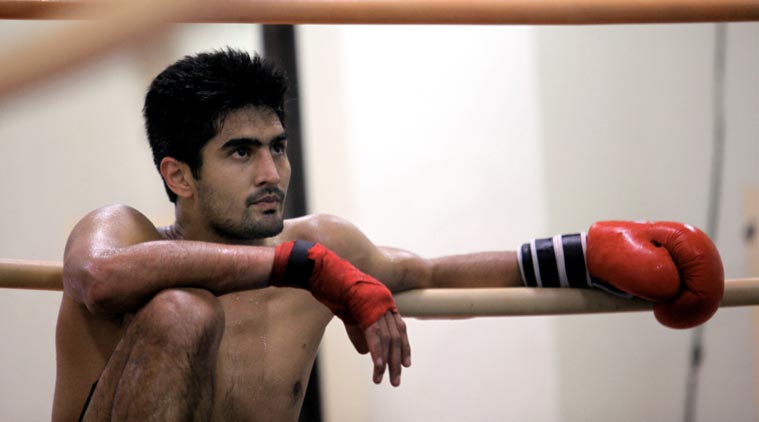 There was no stopping Indian boxing star Vijender Singh as he notched up his fourth successive knockout professional win by pummelling Hungaryâ€™s Alexander Horvath in under three rounds on Saturday. Vijender had little trouble outpunching his opponent, who failed to get up after being thrown off balance by his body blows in the third round. â€œI donâ€™t know what happened to him, I think he was looking to get out by making an excuse. Itâ€™s a good start to the year for me. I am happy to register another knockout win. I think this is a great start for me looking ahead to my WBO Asia title bout in India (on June 11) this year,â€ Vijender said after the bout. â€œMy target is to win the Asia title in front of my home crowd and looking forward to register two more knockout wins in April before I play in India,â€ he added. The 30-year-old Indian, who went into contest on the back of three successive knockout triumphs, continued to be a cut above his rivals, who talk big but deliver little inside the ring. The 20-year-old Horvath, with an experience of seven pro fights before on Saturday, had been dining on snake blood to prepare himself but it seemed the bizarre routine helped little in countering the ferocity of Indiaâ€™s first Olympic and World Championships bronze-medallist. Vijender walked into the arena to the trademark beats of popular Bollywood song â€˜Singh is Kingâ€™ and was cheered vociferously by the sizeable Indian community present inside. The Indian took barely a few seconds to get a measure of his rival and once that was done, Vijender landed some telling jabs to unsettle Horvath, whose spat out his gumshield twice in the opening round itself. Vijender did exceptionally well in commanding the pace of the bout and managed to drain the Hungarian in the second round itself. Horvathâ€™s body language was sluggish while Vijender executed his counter-attacks with the right mix of confidence and power. Horvathâ€™s agony ended barely a minute into the third round when Vijenderâ€™s body blows brought him to his knees, giving the Indian his fourth knockout triumph. Vijender will next be seen in action on April 2, the opponent and venue for which would be decided later.