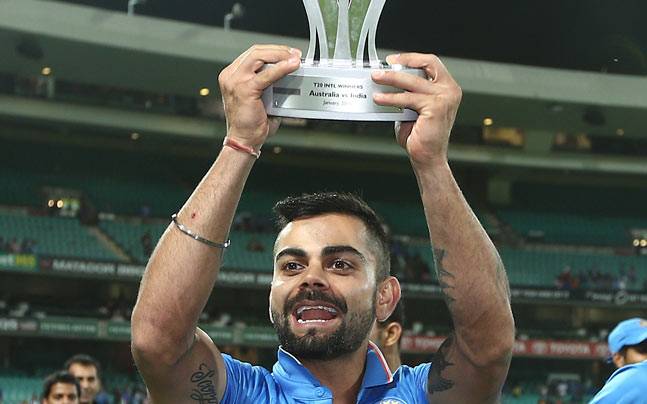 After a dream tour of Australia, Virat Kohli stormed to the top of theICC rankings for batsmen in Twenty20 Internationals The Indian star replaced Australian T20 skipper Aaron Finch after amassing 199 runs from three matches with scores of 90*, 59* and 50 in the T20I series where India defeated the Aussies 3-0. Kohli was named man-of-the-series for his efforts. Kohli was in top form right through India's three-week tour of Australia and smashed 381 runs in the five-match ODI series against Australia. Consequently, he held on to his No.2 spot in the ICC ODI rankings for batsmen India had a miserable time in Ausrtralia, leading up to Canberra, losing four successive ODIs. However, the tables turned in Sydney last Saturday when Manish Pandey's maiden international hundred helped India claim a face-saving win. With new reinforcements, India regained momentum and whitewashed Australia in the T20 series in front of paced stands in Adelaide, Melbourne and Sydney. By the end of the series India moved to No. in the ICC rankings for teams in T20 Internationals. They also occupy the top spot in the Test rankings and are placed second the ICC's ODI rankings.